General discussion about ZunTzu in English.

First of all I wish Merry Christmas, happy holidays and a Covid free new year to everyone. I pray we haven't lost anyone to the virus and wish us all good health in 2021.

Way back in early June, just as the pandemic was hitting hard, Jerome wrote this as part of a reply to another posting:


The ZunTzu app itself still works, but with some networking issues. I will write a post with instructions to troubleshoot those issues.

Probably because of more urgent matters, he didn't post again. (Jerome, I hope you are in good health.)

The networking issues remain. I get a pop-up that reads: "ZunTzu's central server is momentarily out of service. Players may be unable to join. Host anyway Abort" Selecting "Host anyway" brings up the notification text which displays the following: "Players can join from the internet using address ? and port 1805..." The internet address for my location is just shown as a question mark. As a result, no multiplayer connection is made.

So... Does anyone know how to get around this problem?

According to Jerome, he noted this past summer (or was it Spring) that the ZT automatic 'poking' of port 1805 was not working properly when he moved to the new server in late 2019.

His last comment was he wanted to fix this issue at a later time, by rewriting ZT code for future downloads (?). I put a ? here because this is way above my head! I don't know if a new install of ZT will fix this issue, but give it a try. Perhaps he has fixed the issue - but I am unsure. Re-download the core ZT program and see if this works. If it does - - then report back !!!

In my case, I have introductory knowledge of routers. Additionally, I use two routers in tandem. I suspect this is why I have never connected over the net to play a ZT game. Furthermore, I have no partners out in ZT land to test my two-router setup. Would you care to try?

How is your knowledge of routers?
Top

Right now I'm relieved that I can chat with you here. I tried getting on this forum a little while ago and got an error message that the site was down. I was afraid it was going to be down for months like it was in 2019. In case that does happen again, here is my email address so you can reach me: woody8297 at yahoo dot com. Please give me yours if you don't mind.

I don't know too much about routers. I live in an apartment building and use my neighbor's router and my own on two computers when I want to test ZunTzu's multiplayer functions. Since ZunTzu went down in 2019 I haven't been able to connect. ZunTzu doesn't display the Host computer's IP address which I'm guessing is because the "central server" is down. I don't know if that is because of the Port 1805 problem that you mentioned. I don't know what that means.

I'd be willing to try to do a multiplayer hookup with you. I don't think it will be successful in ZunTzu's current state. I haven't reinstalled ZunTzu as you suggested yet. Have you done that? Is that what Jerome suggested and if so, how recently did he say to try that?

You seem to have gotten communications from Jerome that I haven't seen on the forums. If you have a way of contacting him, other than through these chats, maybe you can ask him. (I'm hoping he's okay.)

Jerome has stuff about the 'auto-1805 port.' Like you, I'm no really good at this stuff. Nonetheless, In ZT this is a known issue.

Have you re-downloaded the core ZT program from the site? Give it try and then repot back if it works or not . . .

In the meantime, use my email address and send me an email there. Then I'll have yours to reply to. Since we started this chat, I've run across error messages that the ZunTzu site is down. (I'm lucky I got on today.) I'm concerned that it will go down and we'll have no way to communicate.

So what happened after re-downloading the core ZT program?

Sorry for the delay in my response.

I haven't downloaded ZunTzu yet. The reason is because I use a Windows 7 computer and I wanted to download it on a computer running Windows 10. I should have access to one in a couple of weeks.

Have you tried doing this yourself? It must not have worked if you did or you wouldn't be asking me to try it. But did you already try this?

Any new information from Jerome?

Thanks for your email address. I'll use it if ZunTzu goes down again.

Yes, I have re-downloaded the core program, but I have no one to test

I didn't know you had already done the download. That's great.

You can check to see if Jerome fixed the program by seeing if it displays your address instead of the "?" when you select "Multi Player-Host" and click on the "Host" popup. In the red text on the screen it should display your router's address, like 24.0.192.71. If the question mark is still there, then the core program download hasn't fixed the problem.

This is what comes up on my screen: After I click on the "Host" popup I see the problem "?" in the red text instead of my address:

If your new download shows your address, then I'll download the core program and we should be able to hook up. If you still show that pesky question mark there's no sense in me downloading a still unfixed program.

Bad news; it's not fixed.

I downloaded the program from ZunTzu's site onto a Windows 10 computer and still got the "?" where the address should be. So no multiplayer function is possible.

Hopefully Jerome will see this thread and chime in. He said he had a way to get around this in an earlier post.

Do you know of a way to reach him?

As a moderator, he normally answers me. Still, he has a full life (children!). I'm in my late 50's, and therefore have much more time than a 30-something

So, I try not to bother him very much

Would you be willing to try a private message to Jerome? He knows there are many ZT supporters. A message from such a supporter, just might allow his family responsibilities to be put 'off-to-the-side' for a quick response. Should this not work, I'll bother him with an e-mail (let me know via private message).

A mid-term solution might be for a competent network ZT supporter, to write a ZT specific 'explainer' - - >> if any ZT folk would like to offer their networking skills to this proposed project; send me a message on this forum

I'm more than ready to support such an effort

In the meantime, I did play my ZT box 'Raphia' (GDW) via VNC Viewer with a friend of mine (Miami via Dallas). It worked fine . . . give it a try as a workaround

See https://www.realvnc.com/en/connect/download/viewer/ For those who have tried other such 'viewer' programs, report back here on whether if it worked/not. At least we can share knowledge on this particular workaround

I don't know how the viewer thing works. Sounds like you allow the other computer remote control over yours when he's making his move? Then vice-versa when it's your turn? Only one of you is running ZunTzu then? I'm having a hard time picturing it.

When ZunTzu was working I played several games with a friend by sending my move as a ZunTzu file by email. He would open the file, see what I had done, and take his time making a countermove. The only time we had to hook up in real time was to roll the die. The way ZunTzu stands now, most of that is still possible, but the die rolls would have to be resolved by trust or some other way.

I don't know if that's similar to what your viewer does but that's my current state of "work around."

Yes, it would be great if a tech-savvy guy would step in here and give us directions on how to connect in multi-player mode.

I'll send you a personal email regarding Jerome.

Here is a guide about how to setup your home network to play with a friend. The explanation is a bit technical, but don't worry if you don't grok everything. Just follow the steps in bold. 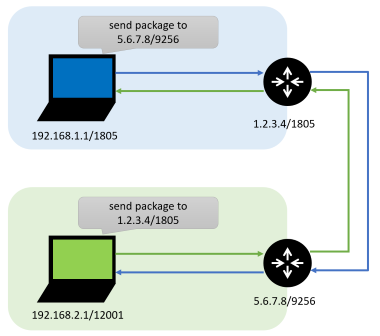 Above is the ideal situation: Blue is hosting the game, Green has joined, and both computers are sending and receiving data through the Internet.

Now, Blue and Green are probably in this situation:

Here is why. Blue is connected to the Internet through a router provided by his Internet Service Provider. As a consequence, the address of Blue 192.168.1.1/1805 is only valid within Blue's home. Green should be using Blue's public address, not its private address. How can Green get Blue's public address? Blue can obtain his public address by googling "whatsmyip". That address changes from time to time so it must be checked before every game session.

Before every game session, Blue (the hosting player) googles "whatsmyip", copies his public address, and sends it as a text message to Green.


Now, Blue and Green are probably in this situation: 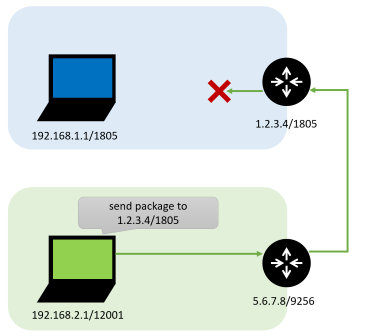 Green's data is received by the router at Blue's home. But Blue's router does not know what to do with the data. Blue probably owns several devices connected to the Internet. Which one is expecting this data? Blue has to tell his router to redirect any data received on port 1805 to his computer (that's the port used by ZunTzu). That can be done by accessing the administration web page of the router, and going to the "port forwarding" settings. Port forwarding can be set up independently for protocol TCP and protocol UDP. ZunTzu uses protocol UDP.

To be done once: Blue (the hosting player) accesses his router administration page and adds a port forwarding entry for port UDP/1805 to the private address of his computer (192.168.1.1 in the example), obtained by running "ipconfig" in a command line.


Note: The router will remember the port forwarding. Blue just has to set it up once. However, if the private address of Blue's computer changes, the router settings will have to be changed accordingly. Blue can make sure that doesn't happen by using a fixed address instead of a dynamic address, but this is beyond the scope of this post. 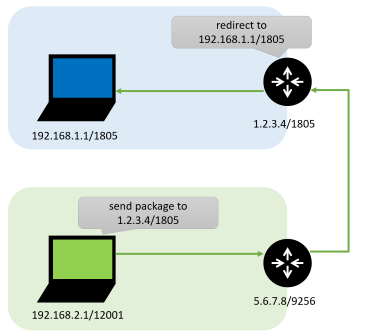 If your network is more complicated you may have several layers of routers (for instance a main router and a separate wifi router). Port forwarding must be set up for each router.
Jerome, ZunTzu developer.
Top

Jerome!! Welcome back! It's SO good to hear from you. I hope you are healthy and enjoying the new year.

Thank you for monitoring the discussion and posting a solution. I tried it and IT WORKS! Here is a screenshot of my two computers on two different routers:

Your instructions were very good. I especially liked the overview of the different components and your explanation of the difference between private and public addresses and how using the wrong address was a dead end. For me, the last part--getting my computer to accept the data from Port 1805--was the hardest...and that was only because I couldn't find my "router administrator page." Once I found that, I was able to select my computer and create Port 1805 using my private address of 10.0.0.224.

Hearing that little bugle call with the display: "Player Win 10 has joined the game!" was a real treat.

Thank you for the kind words. I am glad you could make it work.
Jerome, ZunTzu developer.
Top
Post Reply
15 posts • Page 1 of 1